Posted on September 7, 2014 by Melbourne Plumber 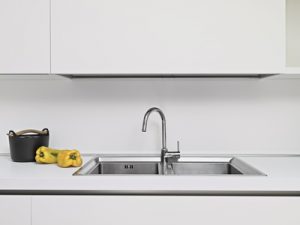 Stubborn kitchen clogs can happen due to a variety of reasons. One of the most troublesome is when grease or liquid fat goes down the drain. When grease or fat is hot, it is a liquid and it makes sense to think it would go down the drain just like water does. However, grease and fat start to solidify as they cool, and when they travel down pipes which are cool, they start to slowly stick to the inside of the pipes. This is even more evident with iron pipes.

Even when you run hot water down the sink in an effort to keep the grease or fat liquid, the water itself will eventually cool down as well in the cool pipes. Over time, the grease and fat build up, which in turn means the water going down will start to drain slower and they will eventually cause a clogged drain. In order to avoid this, it’s important to pay close attention to everything you put down the sink. For example, if you’re throwing old soup out, make sure to skim the fat off the top first and dispose of it elsewhere. There are other sink hazards such as old pasta which can get sticky and cause a nasty clog and should be avoided.

The older a home is the higher the chance for clogged kitchen sinks, unless the piping has been changed out recently. When kitchen clogs start to back up the water, it’s important to call a qualified plumber in to get rid of the clog. A plumber can start by removing the trap to make sure something larger isn’t caught down the drain. They can also use a professional drain snake to clean out the pipes, allowing the water to flow freely again.

If you find you need a plumber in the Melbourne, Florida area, call a licensed master plumber. Not only will they get your drain back up and running like it should, but they can also give you advice as to what shouldn’t be put into the drain or what should be avoided for your specific garbage disposal. Some disposals don’t grind up food as well as others so they can let you know if it’s in your best interest to consider buying a newer, higher powered garbage disposal. On thing is for sure, when you call a licensed plumber, you’ll be up and running in no time, with no more clogged sinks.