The Good Old Days Weren’t Good for Everyone 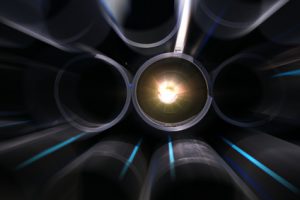 There is nothing worse than having a plumbing problem. When pipes won’t drain right or there’s a clog that nothing seems to fix, the only solution is to call a qualified Master Plumber. Not only are they experienced at clearing out pipes and replacing old ones, they have the ability to see what is going on with camera inspection.

Years ago when someone had a clogged pipe, a plumber would have to guess where the blockage was. Plumbers would have to take an educated guess, and unfortunately, they weren’t always right. This lead to expensive work because the pipes oftentimes had to be dug up. If the plumber was wrong about the location, they may have had to do it two or three more times in an effort to locate the problem. It was an expensive mess.

Ushering in a New Era

Plumbers today have valuable equipment on their side, called camera inspection, which saves time and money.  They use a video camera which is on the end of a long tube and snake it down branch lines, which are the pipes leading away from showers, toilets, and kitchen sinks. The video can also be snaked down sewer lines, which are pipes that lead from the home to either a septic tank or the municipal sewer line that connect near the street.

The benefit of the video camera is the plumber can see exactly where the blockage is, so it takes only one time to get the problem fixed. Another benefit of camera inspection is homes that may have trees near them, such as those in Melbourne, Florida, often have tree roots growing through the pipes, messing up the plumbing and causing the pipes to break. This is very common in older homes as the trees search for water with their far reaching roots.

The Benefits of Hiring a Professional

Many people walk through home improvement stores and see home models of camera inspection units for sale. While these may seem cheaper as you can use them more than once, they have many drawbacks from professional cameras. First, they are rarely long enough to do a thorough job. Professional inspection cameras can be up to 330’ and have high quality images. They are equipped with high powered, professional lighting systems and the images sent to the video screen are always upright and don’t twist around like cheap home units can. They have a high resolution so the plumber can see exactly what he’s dealing with and can evaluate the situation to take care of it in the best manner possible.

In addition to being able to see a good quality image, the camera sends a signal when it is stopped at the blockage point. This allows the plumber to take a locating device near the spot and find the exact location of the block. These professional units can cost up to $15,000 so it’s easy to understand why they are so superior to a model you can find at a home improvement store for only a couple hundred dollars.

When you’ve got a blockage and nothing will work to clear it, it’s time to call in a professional Master Plumber who can get your pipes cleaned out and working smoothly once again.